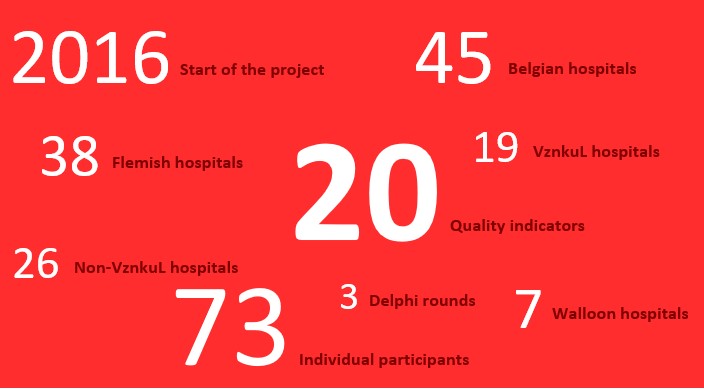 Purpose of the project

In healthcare, quality indicators (QI) are used for various purposes: by physicians for benchmarking and quality improvement projects, by the government for accreditation, Pay for Quality (P4Q) initiatives and cost-effectiveness and by patients to make informed choices about whether and by whom they want to be treated.

Worldwide, P4Q is increasingly used as a tool to improve the quality in healthcare. In Belgium, a huge evolution was seen with the development of the Belgian Health Care Knowledge centre, the Flemish Indicator project for Patients and Professionals and the onset of a policy shift towards value-based healthcare with the actual start of P4Q on July 1st 2018.

This impending start of P4Q triggered us to start a Quality Indicators Project in vascular surgery. The aim was not to “wait and see” for the government to impose QI top-down but  to anticipate and develop a set of both relevant and practically feasible QI that is supported by the Belgian vascular surgery, to monitor and improve quality of care in vascular surgery.

How did we proceed?

In 2016, this clinical research project was initiated at the department of vascular surgery of the University Hospitals Leuven. This was endorsed by the Belgian Society of Vascular Surgery (BSVS) and realized in cooperation with the Flemish Hospital Network KU Leuven (VznkuL).

In September 2016, all Flemish vascular surgery departments were invited to a kick-off meeting in order to inform them about the purpose of this QI project. All interested colleagues had the opportunity to join the online communication platform (www.vznkul.be). Soon thereafter, the first Walloon colleagues also joined.

With the help of a Delphi consensus method, consisting of 3 rounds, a valid an reliable set of QI was developed.

In the first Delphi round, participants were asked to indicate domains in vascular surgery (including both arterial and venous pathology) that are prone to quality improvement based on the latest version of the international guidelines. This feedback was the starting point to define the first rough indicators. In the following Delphi rounds, these indicators were refined based on feedback regarding their relevance and practical feasibility according to the participants. The final set of 20 indicators was presented back to the group in order to reach final consensus. See table for the final result.

Where are we so far?

For each of the 20 quality indicators an indicator information sheet has been developed stating the relevance of the QI, including the precise definition with detailed in- and exclusion criteria and a target value that should be reached for each indicator.

Thereafter, a pilot study was executed in 6 out of 9 hospitals represented in the Delphi task force team who volunteered to perform a first registration of the indicators. All surgeons confirmed that all of the 20 measured indicators were relevant and useful. However, the achievability/practical feasibility was questioned. This pilot study revealed a high administrative burden since full automatic data extraction was not possible in any of the hospitals. It was concluded that it was worth the effort, but that some work had to be done to reduce the administrative burden and the time investment.

To reduce the administrative burden and time investment, we are working on integrated Electronic Patient File registration systems in collaboration with the IT department of various hospitals.

Table: The final set of 20 QI with target values.